Journey to the Aisle… Jayde & Aaron
Posted on April 19, 2012 by lovecherish

This couples journey with Carte Blanche Wedding Design began when I first received a ph call from the brides sister who lived in Tom Price on New Years Eve 2011. From that moment I knew I had my work cut out for me as we only had 3 months to organise this wedding and with the groom working away at times ,the bride having a 2 year old & her family living up north it had to be “all hands” on deck with this one! 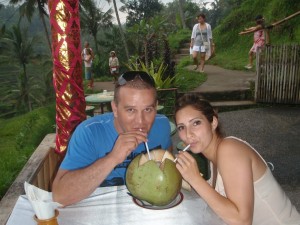 After our initial consultation down in Waikiki it was clear to me that the bride was going to be very hands on ~ which is great; however with such a short time frame decisions had to be made pretty quickly! With all suppliers/vendors booked for the big day it was time to get the show on the road with our rehearsal to be held at the Hidden Gardens ~Caversham House.

The day of the wedding was April Fool’s day and yes lots of jokes got bandied around ~ much to the brides dismay! The bridal party got ready at the lovely Brookleigh Resort in the Swan Valley and for a while there it was touch and go with the weather; which was beginning to worry the bride a bit ~ but hey not even a few raindrops could have dampened the impending nuptials and as they say” the show must go on”!

I saw the limo finally turn up at Caversham House and as I eventually spoke to the groomsmen they all told me that the groom was rather anxious ~ an affliction often felt by some at this time, nevertheless after having a little nip of “courage” all was good :) It was now time for the bride to arrive and the ceremony to begin. 2yr old Teliah was cute as a button but as most of you would know 2yr olds kind of run on their own schedule and that she did; although it did make the ceremony more personal!

One thing I must mention was the fabulous food! Here is a picture I took of the delicious morsel that quickly passed my lips ~ yum:) This entree was: Exmouth Prawns served with marie rose sauce, avocado timbale, lemon dressing & melba toast ~ just delish! 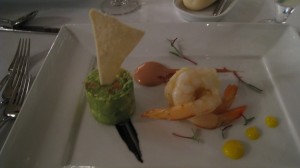 Well, what can I say except that this wedding was rather interesting and having it done in 3mths was a feat but happy to report Jayde & Aaron rode into the sunset to begin their life as husband and wife with a honeymoon in Port Douglas for 10 days.

REAL WEDDINGS | INSPIRATION | PLANNING TIPS | ABOUT NATALIE | BACK TO CBWD